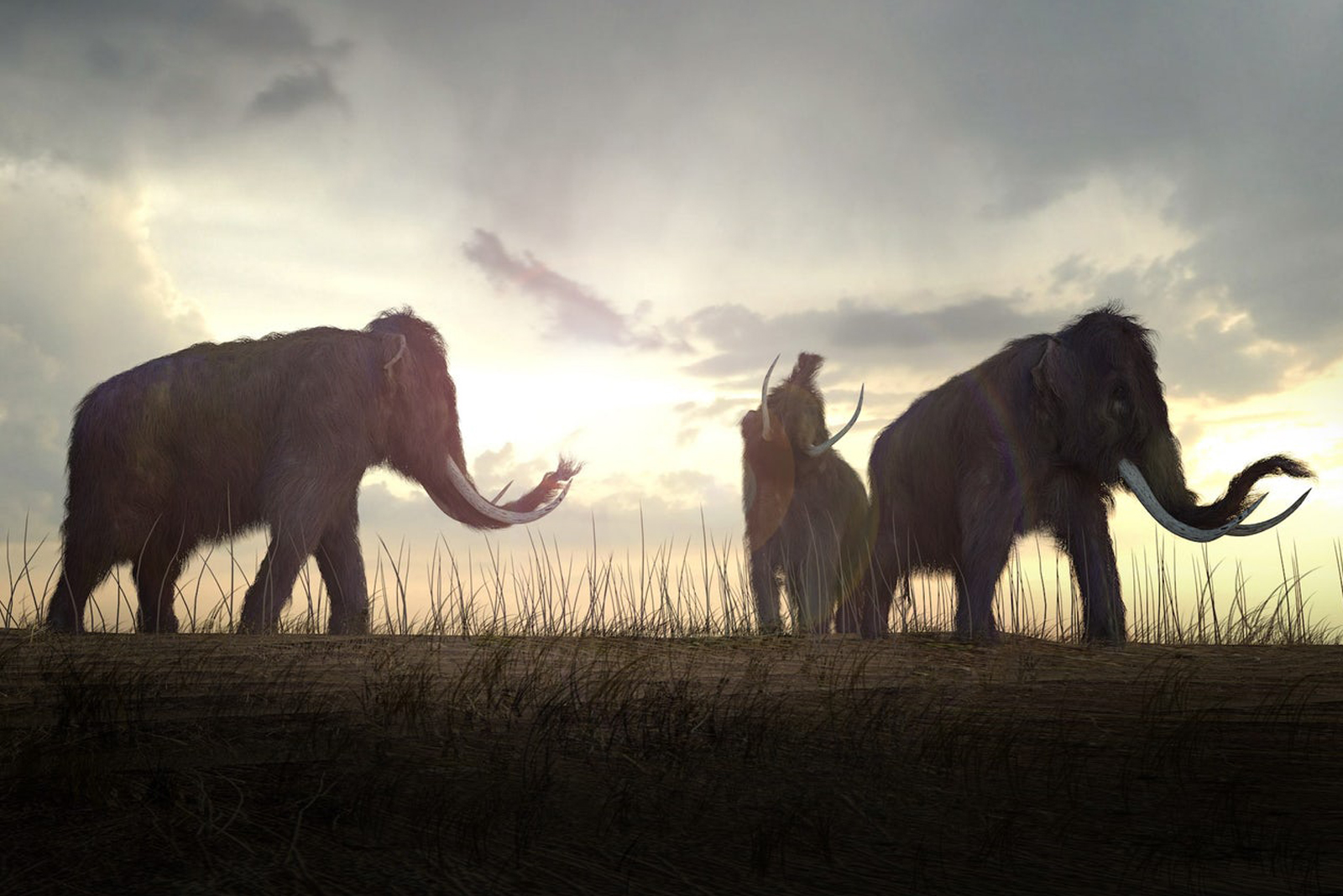 Over the course of geological history, Florida has undergone its share of ecological change. Before becoming a true peninsula, Florida spent hundreds of millions of years submerged under water. The remnants of ancient sea floors can still be found throughout the state in the form of fossilized coral and calcified rock. Forming land masses along the southern coast of North America later connected outlying islands to the continent. In turn, these land bridges created opportunities for migrating terrestrial animals to move south into a new range of distinct habitats. As time passed, changing climates caused fluctuating shorelines to recede and expand. Along with changes to the landscape, the influxes of migratory animals helped mold Florida’s historically diverse ecosystems.

Studies in the field of ecological restoration have documented how fauna can alter the biodiversity of vegetation in a given landscape, especially in the case of large herbivores. A recent paper describes the process in which grazing herbivores influence their ecosystems by mowing down dominant plants that might otherwise smother less pervasive species (Koerner et al. 2018). Prior to cattle and hogs, herds of large grazing herbivores (also known as megafauna) occurred naturally in Florida as recently as the late Pleistocene epoch. Around 10,000 to 15,000 years ago, the last remaining Pleistocene megafauna disappeared from the peninsula (Brook et al. 2002). Their extinction coincides with the arrival of the first modern humans in Florida. Wetter conditions brought on by the end of the last ice age has also been implicated in their demise. The megafauna extinction marked the end of cooler, dry longleaf pine savannas and the beginning of wetland expansions throughout Florida (Whitney et al. 2004).

This paper explores any possible correlation between the Pleistocene megafauna extinction and the environmental transitions to native landscapes that came thereafter. The central theme involves examining the effects of large modern-day herbivores on the biodiversity of vegetation in order to help better explain the degree to which Pleistocene megafauna could have shaped and molded their habitats. Furthermore, numerous environmental factors may be partially responsible for the recent emergence of expanding hardwood forests and cypress swamps that occur alongside longleaf pine savannas; including a combination of changing climates coupled with declining megafauna populations. Without the presence of megafauna to influence the biodiversity of vegetation that occurred after the Pleistocene extinction, plant composition, landscape alteration, and ecosystem processes changed over the course of time.

Megafauna of the Late Pleistocene

The term megafauna is used to characterize a set of animals with an adult body weight of over 97 pounds (Stuart 1991). More specifically, the Floridian megafauna of the late Pleistocene was particularly large in body size compared to their modern-day relatives. There is also evidence to suggest that these large terrestrial mammals migrated from northern regions into Florida on a seasonal basis (Hoppe & Koch 2007). The largest of the herbivore variety include Mammuthus primigenius, Mammut americanum, Megatherium, Glyptotherium floridanum, Equus caballus, Hemiauchenia macrocephala, and Bison bison. Many lived in the open grasslands of Florida and fed on grass, tree vegetation, and on the leaves of bushes or shrubs (Mihlbachler 2019). The largest of these species weighed between one and six tons. Other notable Pleistocene megafauna includes pack-hunters and large solitary predators, such as the dire wolf, saber-toothed cat, and short-faced bear.

The Pleistocene Florida landscape must have been quite a sight, possibly resembling the open savannas of Africa today. As noted earlier, much of the Floridian megafauna became extinct during the late Quaternary period (Brook et al. 2002). For purposes of this paper, the focus will be on the large grazing or plant-eating herbivores that roamed the dry longleaf pine savannas. One of the most important keystone species of the time is thought to be the woolly mammoth and American mastodon, due mostly to their sheer size. The giant armadillo, camelids, ground sloth, and bison were similar with respect to dietary habits and preferences but consumed less daily vegetation when compared to the lineages of proboscideans. Across the entire continent, the extinction of species like the woolly mammoth and American mastodon signaled a change from extensive grasslands and savannas to expanding hardwood forests (Grayson & Meltzer 2002).

The Effects of Modern-Day Grazers and Plant Eaters

Today, ecologists have observed how grazers and plant eaters make a significant impact on their localized landscapes. A 2017 study published in the Journal of Advances in Modeling Earth Systems notes how changes in herbivore abundance can lead to dramatic direct and indirect effects on plant composition, aboveground and belowground primary productivity, nutrient cycling, and other ecosystem processes (Dangal et al. 2017). The mechanism by which herbivores influence their ecosystems was further highlighted by Koerner et al., who showed that herbivores promote high dominance by increasing the abundance of herbivory-resistant, unpalatable species, then resource availability for other species decreases reducing biodiversity (Koerner et al. 2018). Additionally, the body size of an herbivore is also thought to determine the degree to which it can affect plant biodiversity. Along these lines, another study found that large herbivores increased plant diversity at higher productivity but decreased diversity at low productivity, while small herbivores did not have consistent effects along the productivity gradient (Bakker et al. 2006).

More evidence on how large herbivores can alter the biodiversity of vegetation in a given landscape is found in the open savannas of modern-day Africa. Large herds of buffalo, wildebeest, zebra, rhinos, giraffes, elephants and warthogs occur in great numbers on the African plains. Many of these herbivores consume large quantities of vegetation daily. For example, the African elephant may spend 12-18 hours a day feeding and can consume up to 600 pounds of vegetation daily (The National Elephant Center 2019). Research centered around the African elephant shows their role in helping create grasslands, water holes, and salt licks by pulling down trees, digging holes, and consuming vast amounts of vegetation (Saving the Elephants 2019). Moreover, the forest elephant helps shape the forest canopy. One ecological conservation study describes how the presence of forest elephants allows large trees to spread their roots and grow to their greatest heights (Poulsen et al. 2018). Because African elephants are also close living relatives of the extinct woolly mammoth, one might expect similar scenarios in terms of their behavior, diet, and influences on the environment around it.

Implications on the Longleaf Pine Ecosystem

Aside from changing climates, the presence of megafauna may have been one of the most significant influences on the plant biodiversity of the Pleistocene longleaf pine savannas. As cited above from modern-day examples, grazing, trampling, and dung-depositing likely caused longleaf pine savannas to vary more in plant composition than they do today. As Miller et al. points out in, The longleaf pine ecosystem: ecology, silviculture, and restoration, fossil vertebrates of Pleistocene megafauna can give us information about two important aspects of longleaf pine savannas: the possible antiquity of savannas and how the savanna vegetation may have been affected by the megafauna (Miller et al. 2006). Despite their direct and indirect impact on the ecosystem of the time, the basic ecological structure of the longleaf pine savanna was kept intact (Miller et al. 2006). Only later, after warming climates caused shorelines to recede, did coastal wetlands expand their territories inward toward the interior of the peninsula; especially in areas of South Florida in what is now known as the Everglades.

This paper first described the process by which large modern-day herbivores influence the biodiversity of vegetation within a localized environment. With the same line of thinking, one might also apply these ecological mechanisms to extinct species of large herbivores that occurred during the Pleistocene. However, the late Pleistocene fossil record is somewhat limited and, in some cases, incomplete. Numerous studies of vertebrate fossils, mostly from Florida localities, show that longleaf pine savanna specialists and residents were present at least as far back as the early Pleistocene, about 2 million years ago (Miller et al. 2006). Still, we are left to speculate on the extent of abundances, population sizes, and the geographical distribution of longleaf pine savanna herbivores. It certainly seems plausible that Pleistocene megafauna would impact and significantly alter plant composition when compared against the effects of their modern-day relatives, but to what lesser or higher degree remains unclear and still up for debate.

Although much remains unknown about the ecological impact of Pleistocene megafauna on their native landscapes, the environmental transitions that occurred after their extinction could be an indicator of their importance to the biodiversity of the longleaf pine savanna. To gain a better perspective, this paper cited examples looking at the effects of large modern-day herbivores on plant composition, landscape alterations, and ecosystem processes. Presumably, the presence of late Pleistocene megafauna may have had equally critical effects on the ecosystem at large. The fossil record tells us much about the variety of terrestrial animals that roamed the longleaf pine savannas, but tell us little about the cause of their abrupt extinction. By examining the ecological consequences of large-scale extinction events in the recent past, this inquiry supports the value of environmental conservation in the context of regions currently ravaged by declining animal populations. Ecosystems have many complex layers and learning from past events can help restoration experts better understand the importance of having and maintaining a healthy ecological equilibrium.