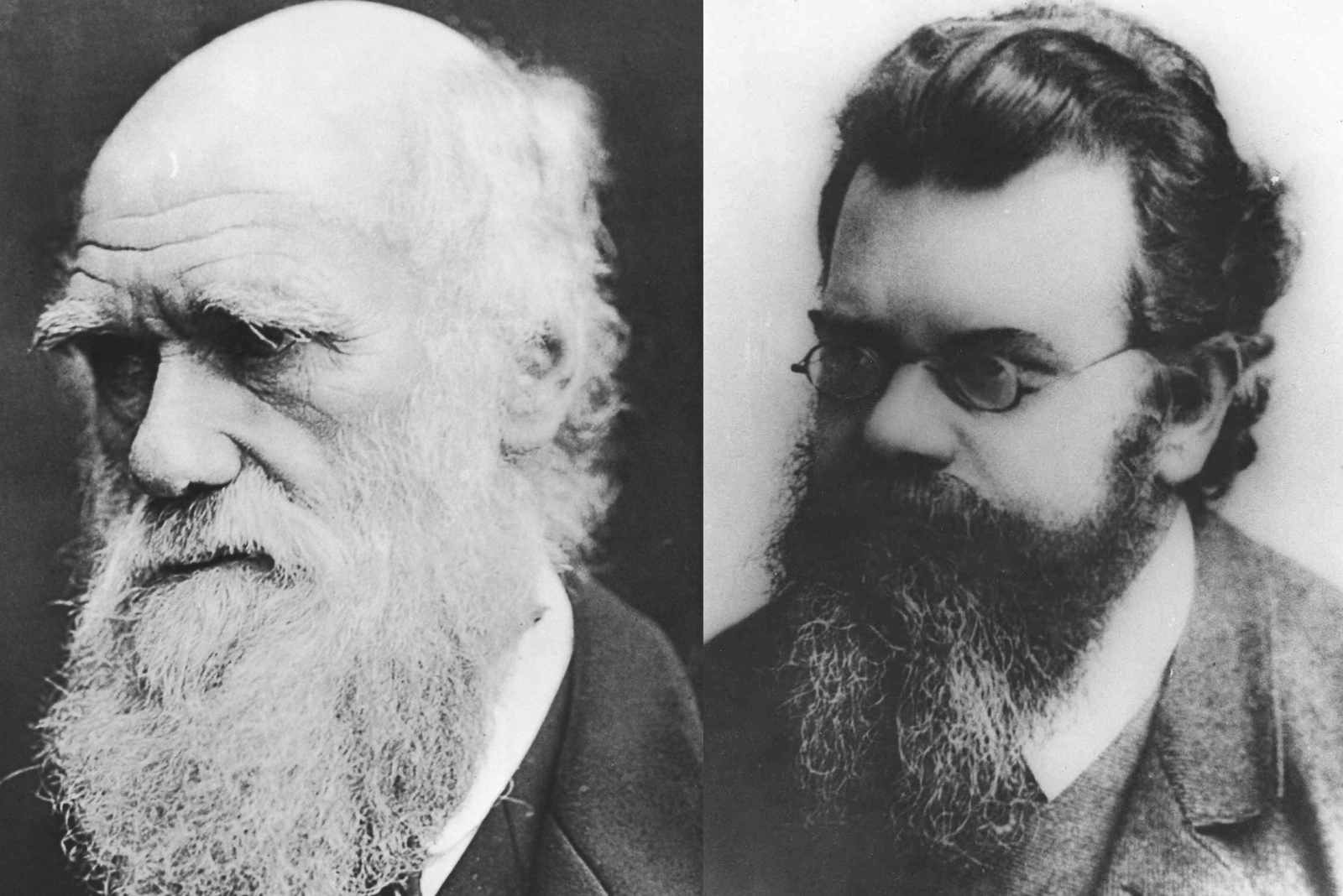 Boltzmann argued that life is a struggle to minimize entropy by capturing as much of the available energy as possible. His insights connected fundamental physics to biological evolution …

By Matthew R. Francis for Smithsonian

Of all the scientific advances, evolution has been the hardest on the human ego. Charles Darwin’s revolutionary theory, laid out in his groundbreaking 1859 book On the Origin of Species, threatened to overturn humanity’s exalted position in the universe. Yet in the same era, a quieter—and seemingly unrelated—scientific revolution was also taking place.

The concept of entropy in physics began harmlessly enough, as an explanation for why steam engines could never be perfectly efficient. But ultimately, entropy also threatened an established hierarchy. And in fact, entropy and evolution were more than casually related.

Yet Boltzmann was more than just a cheerleader of Darwin’s. He understood evolutionary theory more deeply than most in that era, and recognized the full implications of its core ideas. Specifically, he grasped how evolution and the physics of heat both relied on understanding history, and how small changes accumulate over time. In the 19th century, these ideas were so revolutionary as to be considered heretical to many.

Other than their magnificent beards, Darwin and Boltzmann didn’t have a lot in common as people. Though their working lives overlapped by many years, the two men never met. Darwin was more than a generation older, and grew up a landed gentleman from a famous family; illness kept him at home for much of his later life. Boltzmann taught in universities and instructed many future pioneers of 20th century physics. He invented gadgets, wrote poetry, and traveled extensively. He later struggled with depressive episodes, which he described in writing, and committed suicide in 1906.

On the surface, their theories, too, seemed far removed from each other. But look deeper, and they are inextricably intertwined.

Both evolution and entropy upset many people’s views of the “natural” order. Darwin said humans descended from other animals; that we are part of the same family tree as all living things, subject to a universal process called natural selection. Boltzmann said the orderly laws of physics lead to disorder, and require us to use the language of statistics and probability to understand. Both ideas interfered with the 19th century’s views of progress and perpetual improvement, but the theories were also intertwined in a way Boltzmann was possibly the first to recognize.

Entropy was discovered by engineers working on steam engines. They realized that no matter how efficient their machines were, there was always some energy lost in the process. The energy wasn’t destroyed (that’s impossible); it just wasn’t available to be used. Rudolf Clausius named the quantity defined by this energy loss “entropy,” from the Greek word for transformation and the fact that it sounds similar to “energy.”

Physicists enshrined entropy’s purpose in the Second Law of Thermodynamics, which states: In any process cut off from external influences, entropy increases or stays constant. It’s a way of saying, in a cosmic sense, that there’s no free money. Every transaction costs something. But defining it that way doesn’t really say what entropy is—and Boltzmann wanted to know more.

The 19th century saw scientists unifying different aspects of human knowledge: joining electricity to magnetism, using new methods in physics to identify chemical elements, and so forth. Boltzmann wanted to use Newton’s laws of motion, which govern the behavior of macroscopic objects, to understand the behavior of gases.

His precedent was “kinetic theory,” a model proposed by James Clerk Maxwell (whose biggest claim to fame is the theory unifying electricity and magnetism, showing light is an electromagnetic wave) and colleagues. Kinetic theory connected the speeds of microscopic gas particles to measurable quantities like temperature. According to Newton’s laws, individual collisions between these particles should look the same if you reversed the direction of time. However, entropy has to always increase or stay the same—it’s irreversible.

Irreversibility is a normal part of life. Breaking a glass and spilling the water across the floor is irreversible. The fragments of glass and molecules of water won’t spontaneously re-form. Cake batter won’t unmix, perfume spritzed into a room won’t flow back into the bottle. Boltzmann wanted to explain these realistic irreversible events using microscopic physics. He did that by showing how huge numbers gas particles could still produce irreversible results.

Think of a sealed box with a movable partition dividing it in half. In our experiment, we fill half of the box with some sort of gas, then open the partition slightly. Some of the gas will go through the opening in the partition, so that after a while there’s roughly the same amount of gas in both sides of the box.

If we started with half the gas in both sides of the box and then opened the partition, we almost certainly wouldn’t end up with all of it on one side of the box, not even if we waited a very long time. Even though each collision between particles or between particles and the walls of the container are reversible, the result isn’t.

Sure, it’s possible for all the gas particles to spontaneously flow from one side of the container to the other. But as Boltzmann pointed out, it’s so unlikely we don’t have to worry about it. In the same way, entropy can spontaneously decrease, but it hardly ever does so. It’s far more likely to increase, or — once the gas particles are evenly distributed between the sides of the container — stay the same.

The result is directionality and irreversibility, even though it originated in completely reversible microscopic behavior. In that, Boltzmann saw connections between entropy and evolution.

In biology, small changes between generations by themselves are, for our intents and purposes, directionless and random. But Darwin’s natural selection theory showed how they could eventually lead to irreversible change, providing an underlying explanation for how new species arise out of existing ones. Darwin called this phenomenon “descent with modification,” and introduced the idea of natural selection to make it work.

Boltzmann recognized that this was a deep way to understand the proliferation of life on Earth, much like his explanation of entropy provided a deep understanding of irreversible processes in physics.  But beyond irreversibility, he also recognized that life involves competition over available energy—or to put it an equivalent way, a battle to minimize entropy.

Living things are a bundle of traits. Some of those traits are adaptive, meaning they help an organism survive: enable it to find food, or avoid becoming food for something else. Other traits are disadvantageous, and some are neutral, being neither helpful nor harmful. Natural selection is the way evolution picks out the adaptive traits from the disadvantageous ones.

(Boltzmann even used Darwin’s theory to argue that our skill at creating conceptions of how the world works helped humanity to survive and succeed. That meant the human mind — the subject of a lot of philosophical speculation — is an adaptive trait, according to Darwinian principles.)

Natural selection is a harsh view of life. But living things require food—chemicals from air, soil or from eating other organisms—and that means competition. Organisms that survive pass their adaptive traits on to their offspring, while harmful traits disappear. If enough of those traits build up over the generations, entirely new species can spring up. One of those species was ours: humans were born out of the processes of natural selection and adaptation, just like all other life.

Boltzmann used both theories to argue that life’s struggle isn’t over energy. Earth gets plenty of energy from the Sun, far more than life actually uses in the form of photosynthesis (and other organisms that eat plants and other photosynthesizers). Instead, life is a struggle to minimize entropy by capturing as much of the available energy as possible.

Boltzmann’s insight connected Darwin’s theory to fundamental physics, an astounding intellectual achievement. It showed how both evolution and entropy have influence beyond their original domains. Today we have evolutionary algorithms and entropy in information theory, and evolution is on criterion NASA uses in its search for life on other worlds.

Darwin’s and Boltzmann’s twin revolutions live on. Perhaps you could even say they’ve co-evolved.